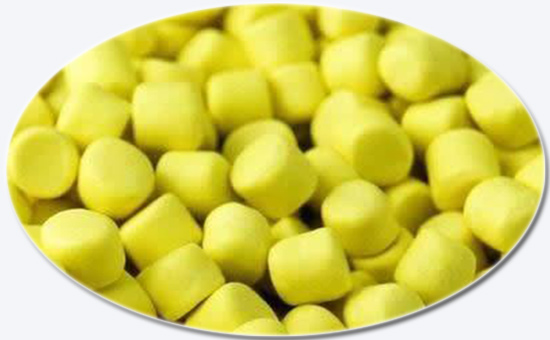 Sulfur is the most traditional vulcanizing agent in the processing of rubber products. Under the action of sulfur, the linear macromolecules of rubber will be transformed into a three-dimensional network structure. Tensile strength, etc .; When using recycled rubber to produce rubber products, sulfur is also the most commonly used vulcanizing agent, especially when producing some high-strength and high-wear rubber products. In fact, sulfur is difficult to disperse and scorch easily in the rubber compound. Therefore, it is necessary to strictly control the sulfur addition method and timing when mixing.

Sulfur itself has a low melting point, and liquefaction and agglomeration problems will occur at a temperature of about 100 ° C. Therefore, when adding sulfur during the mixing process, the mixing temperature must be controlled below 100 ° C to avoid excessive mixing temperature and sulfur. The problem of liquefaction and agglomeration results in problems such as uneven mixing of the rubber compound and local scorch during vulcanization, which improves the uniformity of the recycled rubber and ensures the quality of the recycled rubber product.

When sulfur vulcanization is selected for recycled rubber, sulfur is usually added quickly in the final stage of mixing, which can effectively avoid scorching. It should be noted that when using nitrile rubber with recycled rubber to produce rubber products, sulfur 1JLYY1210 has low solubility in nitrile rubber and it is difficult to disperse uniformly. Therefore, sulfur needs to be added at the beginning of mixing; in order to avoid scorching and vulcanization The accelerator can be added at the end.

3. Pay attention to the way of adding sulfur

Sulfur is a typical powdery compounding agent, and it is easy to fly according to the "wind direction" factor during the addition process. As a result, sulfur cannot be evenly dispersed in the rubber compound. Therefore, sulfur can be mixed with hb softened oil, paraffin, and clay during the mixing process of recycled rubber Compounding agents such as magnesium carbonate and magnesium carbonate are added together to form pastes or master batches to avoid the problem of “scattering” of sulfur during the adding process.

Recycled rubber is the product of recycling and processing of waste rubber products. It has undergone a desulfurization process during the production process, but it also contains a certain amount of accelerators that have not been completely removed. At this time, when designing a formula containing recycled rubber products, it is necessary to Calculate the amount of some compounding agents, reasonably adjust the amount of sulfur to avoid problems such as under-sulphur and over-sulphur; strictly control the timing of adding sulfur during the mixing process of recycled rubber, provide better conditions for subsequent vulcanization and other operations, and further optimize the regeneration Comprehensive indicators of rubber products.